Amid all the reflection on the 10-year anniversary of the start of the subprime loan crisis, here s a throwback that investors could probably do without.

There s a section of the auto-loan market — known in industry parlance as deep subprime — where delinquency rates have ticked up to levels last seen in 2007, according to data compiled by credit reporting bureau Equifax.

Analysts have been warning for years that subprime car loans pose a threat to lenders as delinquency rates have edged higher since reaching a post-recession low in 2012. But it wasn t until last quarter that the least creditworthy borrowers started to show the kinds of late payment profiles that accompanied the start of the financial crisis.

We re seeing an increase in delinquencies across all credit scores, but in the highest credit quality, it s just a basis point or two, Chief Economist Amy Crews Cutts said in an email Tuesday. In deep subprime, the rise is more substantial. What stood out to me was the issuers. Those that have been doing this for a decade or more were showing the better performance, while those that were relative newcomers were in the worse category.

The reason for the increase, she posited, is that lenders have loosened underwriting requirements as more firms tap into a declining market for car loans, not that there are more customers with worsening credit profiles.

It isn t a case of chasing a larger subprime share, Cutts said in an email Tuesday. There s been almost no change in median credit scores. That means they are letting other underwriting characteristics slide, she said, referring to the lenders that issue the bulk of subprime loans — so-called monolines that specialize in one area of the credit market and dealer-finance companies that work specifically with car sellers.

Cutts said Equifax data show that lenders are extending repayment periods and offering longer terms, with many starting to exceed seven years. There may also be loosening by all lenders on factors that I cannot evaluate in my data, she said, citing downpayment requirements, lack of third party validation of income and employment.

That s not to say a repeat of the financial crisis is nigh. There might not even be cause for major concern over the auto loan market, Cutts said. Monolines and dealer-finance lenders accounted for just 4 percent of new originations in the second quarter. And the overall market is shrinking — there were 7.96 million loans in the first half of 2017, down 3.9 percent from a year ago. Just 1.94 million of those were subprime, a 12 percent drop.

Meanwhile, the overall rate of late payments exceeding 60 days on all types of auto loans came in at a still-healthy 0.91 percent, up just eight basis points from last year. The rate on prime loans was at 0.33 percent, an increase of three basis points.

Risk in auto lending is actually very balanced, Cutts said. More than 90 percent of overall auto loans are made by banks, credit unions, and captive auto finance companies, and these entities have become increasingly conservative and discerning in their underwriting.

As soon as lenders (and the investors behind them) get overconfident that they have better models and can make excess profits by disrespecting credit risk, they always get their hats handed to them sooner or later, Cutts said. The mortgage market learned this lesson at the expense of the entire global financial system, and it is playing out now in a micro-level, in the ABS market for subprime auto loans.

Watch Next: Why Subprime Auto Loans May Be the Next Big Short 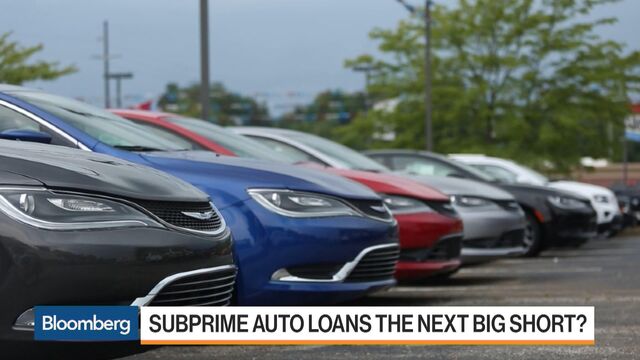